What L.E. Behymer was to serious music in “high brow” Los Angeles, Lou Daro was to the “low brow” devotees of championship wrestling in the City of Angeles.  Daro was born as Louis Elias to a large Jewish family in 1882 in Satu Mare, Romania, in the northwestern corner of the country near Hungary and Ukraine and which was then part of the Austro-Hungarian Empire.

Though there were press accounts that said he ran away from home at age 10 to join a Barnum and Bailey Circus and that he developed an act as “Daro the Strong Man” in which he had two automobiles roll over his body as well as feature him out-pulling horses, Elias instead immigrated to the United States with his family when he was 18 and was living with them a decade later in 1910 when the census recorded him as proprietor of an amusement stand with a seven-year marriage.

The strong man act came later when the stocky, barrel-chested, powerfully built Elias turned into a wrestler known as “Daro the Strong Man” and then “The Great Daro,” mainly becoming a local sensation in Buffalo.  The earliest news accounts found of his grappling career is from 1916 in that city, when he was already in his mid-thirties, and it appears to have ended just four years or so later.  His younger brother, Joseph, was a steelworker in Buffalo in 1920 and took the surname of Daro, as well.

The pair then came west to Los Angeles in 1924 and Lou Daro, assisted by his much younger brother, Jacob, or Jack Daro, transformed into a wrestling promoter.  He brought athletes against whom he had battled on the mat, such as Jim Londos (born Christos Theofilou in Greece), Joe Stecher, and many others, to complete and perform in his matches.  It was said the take at his first event was only $220.

Among the locations where Daro staged his matches was the Exposition Park Armory and the Philharmonic Auditorium, where Behymer was staging “serious music” concerts.  Then, in August 1925, a new venue opened that was more purposefully built to meet the needs of Daro’s growing empire.

The Olympic Auditorium on Grand Avenue and 18th Street had one of the largest capacities of an indoor sports venue when it opened, with up to 15,000 spectators allowable.  Most of the uses of the facility were for boxing and wrestling and, when the summer Olympic Games came to Los Angeles in 1932, the venue hosted the training and competitions for boxing, wrestling, and weightlifting.

From the opening of the Olympic, Daro was a major figure with his matches drawing enormous crowds witnessing performances and competitions by major figures in the sport. An image in the 9 August 1925 edition of the Los Angeles Times showed a caricature of Daro shining a spotlight on the side of a newly opened auditorium and highlighting such stars as Londos, Stecher, Jim Browning, Don Castanos, Renato Gardini and Stanislaus Zybszko.

The Daro wrestling empire continued to grow and grossed $1 million annually at its peak which appears to have been during the 1930s.  Yet, his rise did not come without challenges.  For example, in July 1925, just before the opening of the Olympic and when Daro was finishing his run of matches at the Exposition Park Armory, the Times reported that he was battling with “the wrestling trust” that was said to have a near-monopoly on promotion of that sport in America.  His response was to work through managers of wrestlers or directly with the athletes.  The paper added:

With Daro every wrestler will have a chance, no matter what his affiliation is.  The matchmaker for the Olympic Auditorium intends to run a number of shows this season, and he does not want to be swayed by any group of men, no matter how powerful they are in that particular game.

In early January 1928, Daro got into an unofficial “wrassling” match on the corner of Third and Figueroa in downtown Los Angeles with professional wrestler Hassan Mohammed (wrestling being a sport of longstanding tradition in the Middle East), a.k.a. The Terrible Turk.  The two were charged with disturbing the peace with the incident said to stem from Daro’s refusal to book Mohammed for matches at the Olympic.  The impresario claimed that The Terrible Turk threatened to kill him and a municipal court judge freed Mohammed on promise that he would not contact Daro.

After over fifteen years as a dominant force in local wrestling, however, Daro confronted a problem that could not be overcome with brute force or wily promotion.  The California Assembly launched an investigation in early 1939 over reports that the promoter provided excessive payments to unnamed individuals that seemed at variance with what would be expected outlays, an issue that also involved boxing promoters.

Duro failed to appear before an investigating committee from the Assembly that included future Los Angeles mayor Norris Paulson and Jack Tenney, later notorious for his anti-communist crusades and a composer of popular songs including “Mexicali Rose.”  He immediately retired in April from wrestling promotion and spent the remainder of his life living quietly in Los Angeles and on a farm in Hemet in Riverside County with his second wife.

Though his brother Jack was granted a half-year provisional license to promote wrestling, the scandal severely affected attendance at matches and wrestlers were not being paid.  By summer 1940, Jack Daro lost his license and the family enterprise ended.  Lou Daro died in July 1956 in a Santa Monica hospital and was buried at Forest Lawn Memorial Park in Glendale.

Tonight’s highlighted artifact from the Homestead’s collection is a program for a Daro produced match at the Olympic on 8 February 1928.  There were three events, including a jiu-jitsu wrestling combination featuring Y. Fujita and Sanza Kozak to open the evening; a match between Ira Dern, who had the distinction of being a rare professional Mormon wrestler, and Jack Roller, a Los Angeles competitor (ironically, the head of the World of Wrestling organization in Oklahoma has the same name); and the main event, a contest between legends Londos and Browning. 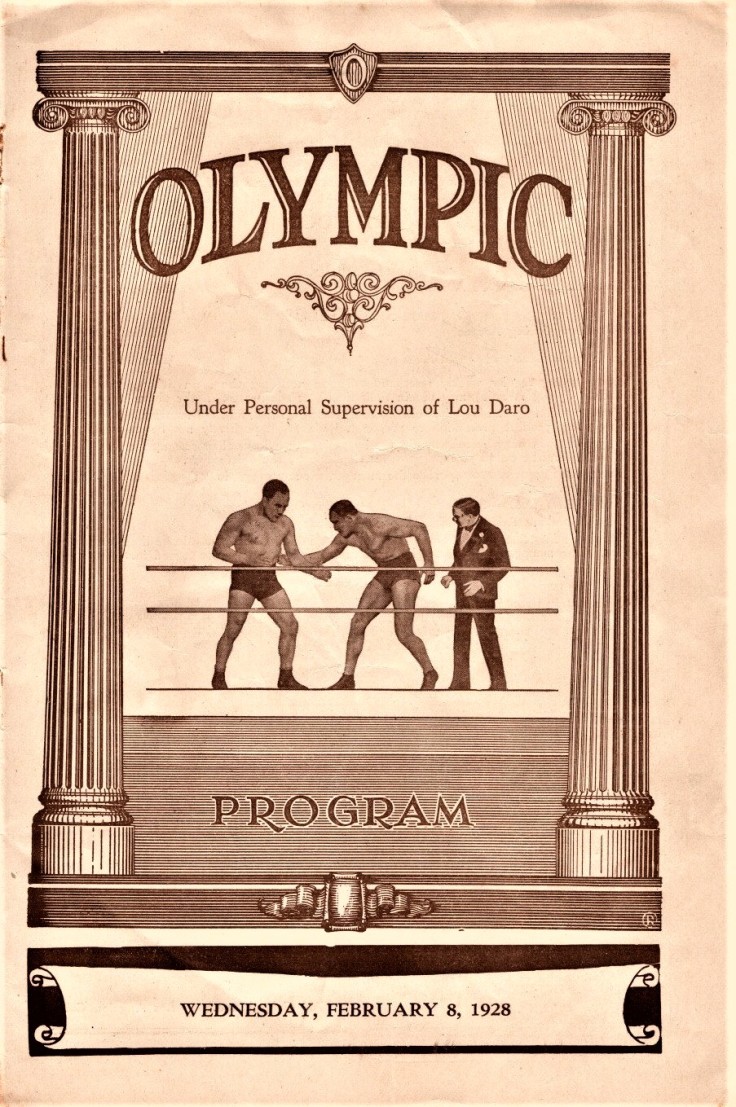 The Times covered the evening’s program in some detail, noting that Fujita, whose first name was never provided, came into the jiu-jitsu bout having vanquished his two prior opponents, while Kozak, who appears to have been Kurdish, came off a victory over another Japanese expert, Professor T. Higami.

Dern, said to be a former lightweight wrestling champion, came into his contest with Roller at a 30-pound disadvantage in his first Los Angeles appearance, and both were said to be highly motivated to win so they could move up to a featured main event appearance in the near future.

As for Landos and Browning, they’d fought just ten days prior in New York, where the latter, a Kansas native renowned for his scissor-kick moves and who was thirty pounds heavier than his opponent, lost to the older, more experienced Greek native.  It was reported, however, that had the match, said to have been one of the most vicious in the Big Apple in years, gone longer “Browning would have crushed Londos to a pulp.”

The Olympic match up was considered a “finish bout” by the state athletic commission so that the winner would qualify to meet the winner of a championship match in St. Louis between Stecher and the famous Ed “Stranger” Lewis.  Browning was quoted as saying he would give Londos the worst pummeling to his head and body he’d ever experienced, while the Greek legend could only train for a few days because of the after effects of the New York match.

The results of the match included Fujita using a stiff-arm maneuver to floor Kozak after twelve minutes in their contest.  The lighter, but likely more agile, Dern took just over ten minutes to flip Roller with an airplane wing hold.  Finally, in the main event, witnessed by some 5,000 spectators, Browning appeared to have the better of it with his signature scissor hold and was reported that he “gave the better exhibition.”

The bout had a two-hour time limit with two falls out of three also securing a win if achieved before that time.  It was not until just over ten minutes left that Londos used a Japanese arm scissors move following some headlocks to bring Browning to the mat for the only fall.  In the remaining time, Browning, who protested the move used by Londos to score the fall as against the rules, “rushed Londos all around the ring without securing a fatal hold” and lost again. 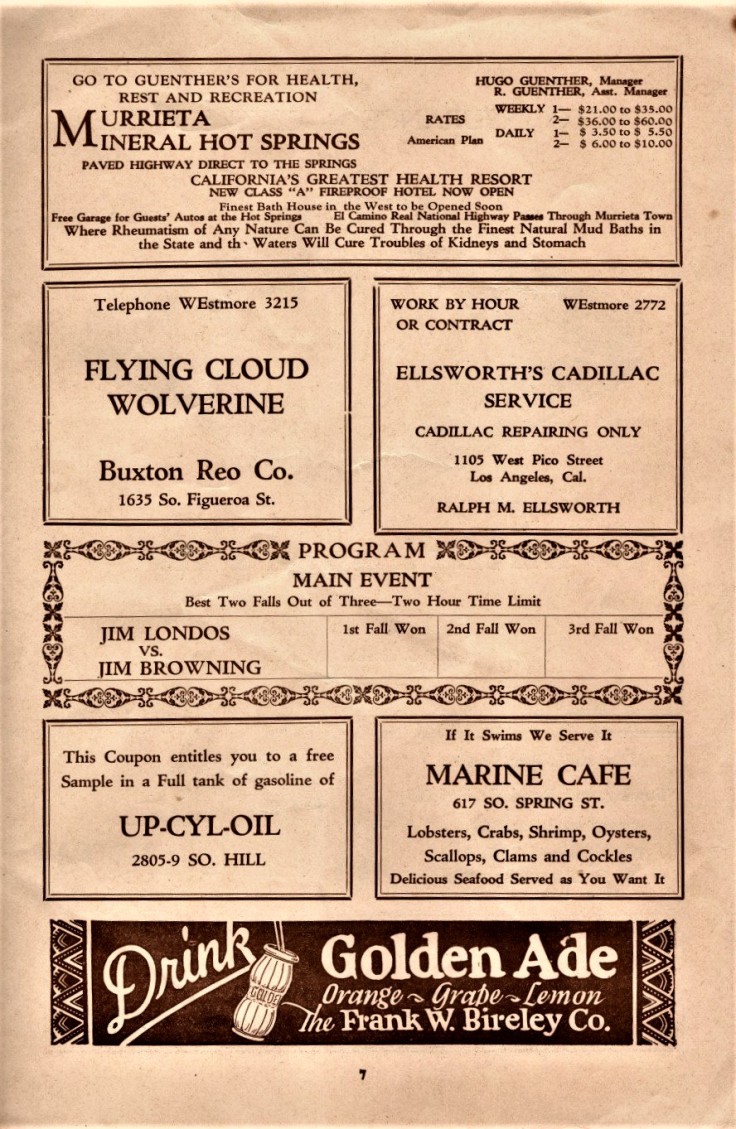 As for the Olympic Auditorium, it continued to be a prime area venue for wrestling, boxing and, later, roller derby (some of us of a certain age well remember watching these events on local television) for decades after the Daros dropped out of the promotion business.  After the facility closed for a time in the mid-1980s, it reopened to boxing, wrestling, raves, concerts and other events.  In 2005, the building was purchased by a Korean church, styled the “Glory Church of Jesus Christ,” and remains in use for religious purposes.

Come see our lovely historic houses! Tours are offered Wednesday-Sunday. Check out our website for tour times!
Happy Valentine's Day! ❤️ See if you can spot these Valentine's Day cards while on a tour of La Casa Nueva this weekend. 👀
Don't let the rain bring you down. Join us tomorrow for Flirting with History!
Don't miss our guided tours at Flirting with History on Sunday, February 9! We have garden tours at 12:30, 1:30, and 2:30 p.m. and special houses tours with readings of old love letters at 1, 2, and 3 p.m. We will also have regular house tours in Spanish at 2:30 (Workman House) and 3:30 p.m. (La Casa Nueva).
Excited about Flirting with History this Sunday? Take our quiz from last year to see which historic Homestead pair you and a loved one are most like! See the link in our bio to take the quiz.
Flirting with History is this Sunday! Join us from 12 to 4 p.m. for special house tours, garden tours, and a Love's Quest. Plus, make your own small bouquet using the Victorian language of flowers. Free! 💐