This year marks the centennial of the Los Angeles Philharmonic Orchestra, established under the patronage of William Andrews Clark, Jr., son of the mining tycoon who left his mark in many areas and ways in the American West stemming from his spectacular success as one of the “copper kings” of Butte, Montana, and including newspapers, railroads, and many other enterprises.

Clark, Jr. was trained in the law and served on the boards of several of his father’s companies and was a major book collector, whose holdings formed the basis of his namesake library at U.C.L.A.  He was also a main contributor to the building of the Hollywood Bowl after he launched the Philharmonic in 1919.

There was, however, a predecessor orchestra in the city, the Los Angeles Symphony, which was launched in 1898 by violinist and composer Harley E. Hamilton and, much less widely known, a Woman’s Symphony Orchestra of Los Angeles, which was actually formed in October 1893 and played its first concert the next spring.

Hamilton was born Harley Burnham in 1861 to parents who were members of the Oneida Community, a religious communal society that existed from about 1840 to 1880 and which had such unusual practices as complex marriage (every man was married to every woman in the community), male continence (basically, the withdrawal method of birth control), ascending fellowship (in which older members deflowered virgin members–this applying to both sexes), and mutual criticism (in which a member would be criticized by committees or the entire community as a way to moral purity.)

After his father died, Hamilton’s mother remarried and the youngster took his stepfather’s surname.  His musical ability was pronounced from early on and he was sent to the New York Musical College.  Soon afterward, in 1883, he arrived in Los Angeles (some accounts erroneously stated he arrived four years later) and immediately became part of the town’s nascent serious music society, performing concerts and leading ensembles.

Sometimes, he encountered some difficulties, such as when he formed the “American Orchestra” in town and booked a performance at the Turnverein Hall for April 1884.  When the orchestra failed to appear, members subscribing under the ensemble’s name wrote a letter to the Los Angeles Herald stating:

The fault lies entirely with Mr. Harley Hamilton, who has heretofore been leader and director of our orchestra, as he absented himself from the city after making all arrangements for us to play at said entertainment; and not only that, but he locked up the music necessary for the occasion, thereby most effectually “blocking our wheels.”  We, as an organization, desire that the public should know where the fault lies, and place their censure where it rightfully belongs.  As Hamilton is about to leave town to join a circus band, he thinks to thus escape his merited portion of the censure.

Despite this controversy, Hamilton not only remained in Los Angeles (whatever may have happened with the “circus band”), but his stature rose with further violin recitals, ensemble performances and, then, the formation of the Woman’s Symphony Orchestra, the second such ensemble in the United States following Fadette Women’s Orchestra of Boston, started in 1888.  Formed in October 1893 with rehearsals beginning the following month, the symphony debuted at a charity event at the city’s Grand Opera House, built in 1884 by Ozro W. Childs, a nursery owner and real estate developer, on Main Street.

The Woman’s Orchestra gave its first performance last night at the Grand Opera house for the benefit of the Associated Charities.  The stage was beautifully decorated with roses.  A fair-sized audience was present.  The orchestra is composed of twenty-nine young women, who presented a pretty picture in their white gowns.  It has been organized only since October, but did not begin rehearsing until November.  While, of course, in so new an organization there are defects, taken as a whole the performance last night was creditable both to the participants and conductor, Harley E. Hamilton.   The orchestra lacks force, nearly all the work being done by the strings.

The orchestra performed works by Bizet, Wagner, Haydn and other lesser-known composers, though the reviewer felt that the finale from Haydn’s Fifth Symphony and the grand march from Wagner’s Tannhauser “were too ambitious and proved a disappointment.”  Members of the ensemble included thirteen violinists, three viola players, three cellists, four cornet players, two percussionists, and sole players of the flute, clarinet, trombone, and bass.

Male orchestras were in those days generated by amateur music clubs, such as the Ellis, Orpheus, and others and the quality of those ensembles could be quite good.  With the support and assistance of Lyndon E. Behymer, who became a major impresario of music, opera and theater in the Los Angeles, Hamilton then formed the Los Angeles Symphony Orchestra five years after the Woman’s Symphony Orchestra.

For years, it was later reported, it was a tough slog for Hamilton and his dual ensembles, as they worked vigorously and devotedly towards establishing a decent enough clientele to attend and support the performances of both orchestras.  Hamilton continued to manage both and serve as conductor until 1913, when he resigned his position at the end of February and then led a final concert, including the first mixed ensemble of both bodies, in May.

While it was stated in subsequent accounts that Hamilton resigned on account of encroaching deafness, this was not stated in newspaper articles about his stepping down as the head of the two orchestras and he continued to conduct occasionally through about the mid-1920s.  He then retired and died of a stroke in Los Angeles in 1933, at the age of 71.

Next to take up the baton for the Woman’s Symphony Orchestra was Henry Schoenefeld, who was born in Milwaukee in 1857 and studied at the Weimer Conservatory in Germany.  In 1879, he moved to Chicago and conducted a German orchestra and then led a choir for over a decade before moving to Los Angeles, where he conducted another choir and then replaced Hamilton with the Woman’s Symphony Orchestra.

Schoenefeld composed two operas, a symphony, and many piano works along with other pieces and taught music at U.C.L.A., where one of his students was Roy Harris, a noted composer of many symphonies.  Schoenefeld was active in music until not long before his death in 1936 and he appears to have led the Woman’s Symphony Orchestra until about 1930.

The ensemble continued to operate, although the straitened circumstances of the Great Depression and the World War II years likely diminished its strength.  It looks to have dissolved in the early 1950s or been reconstituted into another ensemble, the California Woman’s Symphony Orchestra, which folded in 1961.

Tonight’s highlighted artifact from the Homestead’s collection is a program for a Woman’s Symphony Orchestra of Los Angeles concert given at the Philharmonic Auditorium (located at Fifth and Olive streets across from Pershing Square) on 9 February 1927, being the first of two performances, the other taking place on 1 April, of the season.  At the time, the orchestra’s management was under the director of Behymer.

Honoring the founding by “pioneer Symphony-Conductor” Hamilton, the encomium added that

at first, perhaps, it was no more than a wish, however, enthusiasm soon aroused the few cultured women who with great vision and determination brought this orchestra to such a high standard which is most remarkable in the local history of music.

Under the baton of Schoenefeld, it was stated, “the performances have been of a far higher order than the most enthusiastic sponsor could have expected” and “with a degree of finish which would have done credit to any similar organization in the country.”  While presenting music was a main goal of the body,

its principal aim and object is to encourage and promote musical culture and to give women musicians an opportunity for studying symphonic music.

Lists of the board of director and advisory board members (among the latter were figures from the city’s music and art lovers, like pioneer woman librarian Mary Foy, the wife of Hector Alliot of the Southwest Museum, Marco Hellman, and Mrs. Fred Bixby, and lists of patron, sustaining and associate members, and for honorary patronesses, including Frances Widney Workman, wife of Los Angeles City Council President Boyle Workman (grand-nephew of William and Nicolasa Workman of the Homestead) were also included.

The program included the overture from Mozart’s “The Magic Flute;” Beethoven’s First Symphony; “Two Arabesques” by Debussy; “Two Slavonic Dances” from Dvorak; and several vocal pieces for featured soloist baritone Louis Council.  Listing of the personnel included nearly 100 women, some sixteen of which were on leaves of absence. 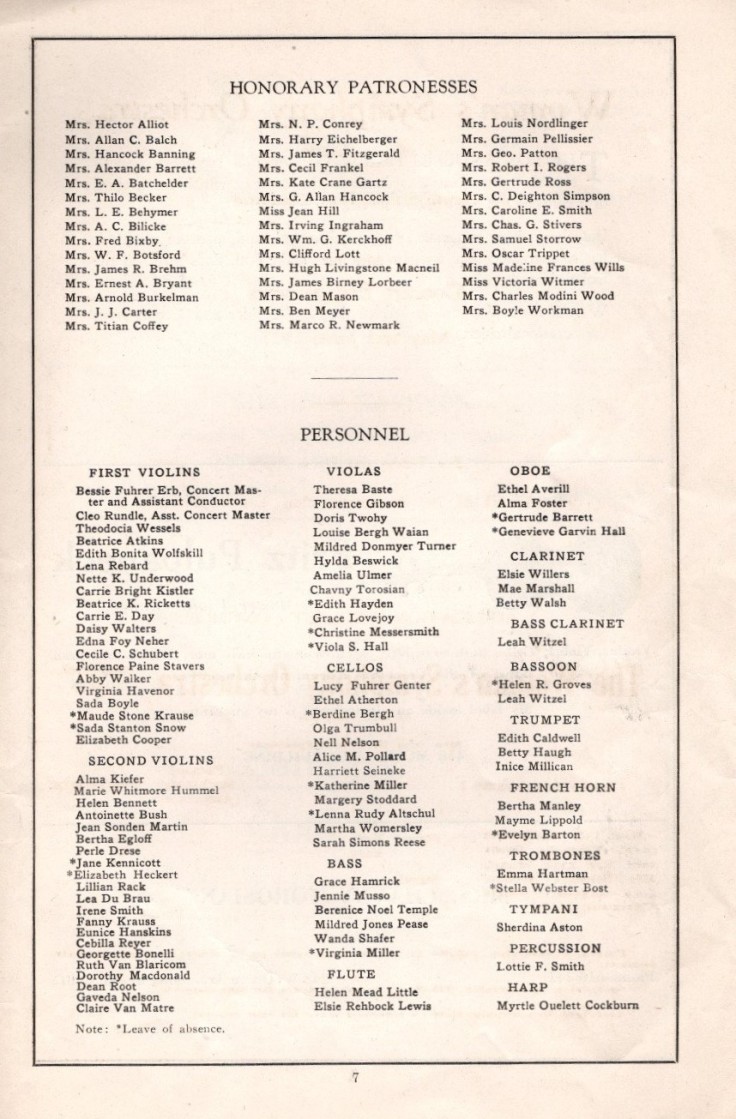 Advertisements included those from Schoenefeld and his music studio and other music teachers; a van and storage company; a health food store (with a very dramatic Art Deco look); a dairy; two cafeterias, which observed that lady artists were in the orchestra while “our women cooks are artists in their line;” the Mount Lowe excursion for the Pacific Electric Railway.

Then, there was a plain statement from the PERY’s subsidiary, the Los Angeles Railway (which operated lines within city limits, which observed that for over three decades it “has been giving service for a nickel.”  With increased costs of materials, labor, power and equipment, however, (not to mention competition from the automobile), the company “can no longer make both ends meet on the nickel fare.”  So, it requested its patrons “for a 6 1/4 cent fare from the regular rider and 7 cents from the occasional rider.”

Women are today much better represented on the rosters of professional orchestras, so this program is a notable artifact as a reminder of a time when that was not the case.  With the program is a broadside advertising the other concert from the 1926-27 season, including a photo of the orchestra; biographical information about features soloist, pianist Joseph Fogel; positive press quotes; an application for that concert; and the planned program, with works by Saint-Saens, Mozart, Mendelssohn, and Schoenefeld’s suite for string orchestra.