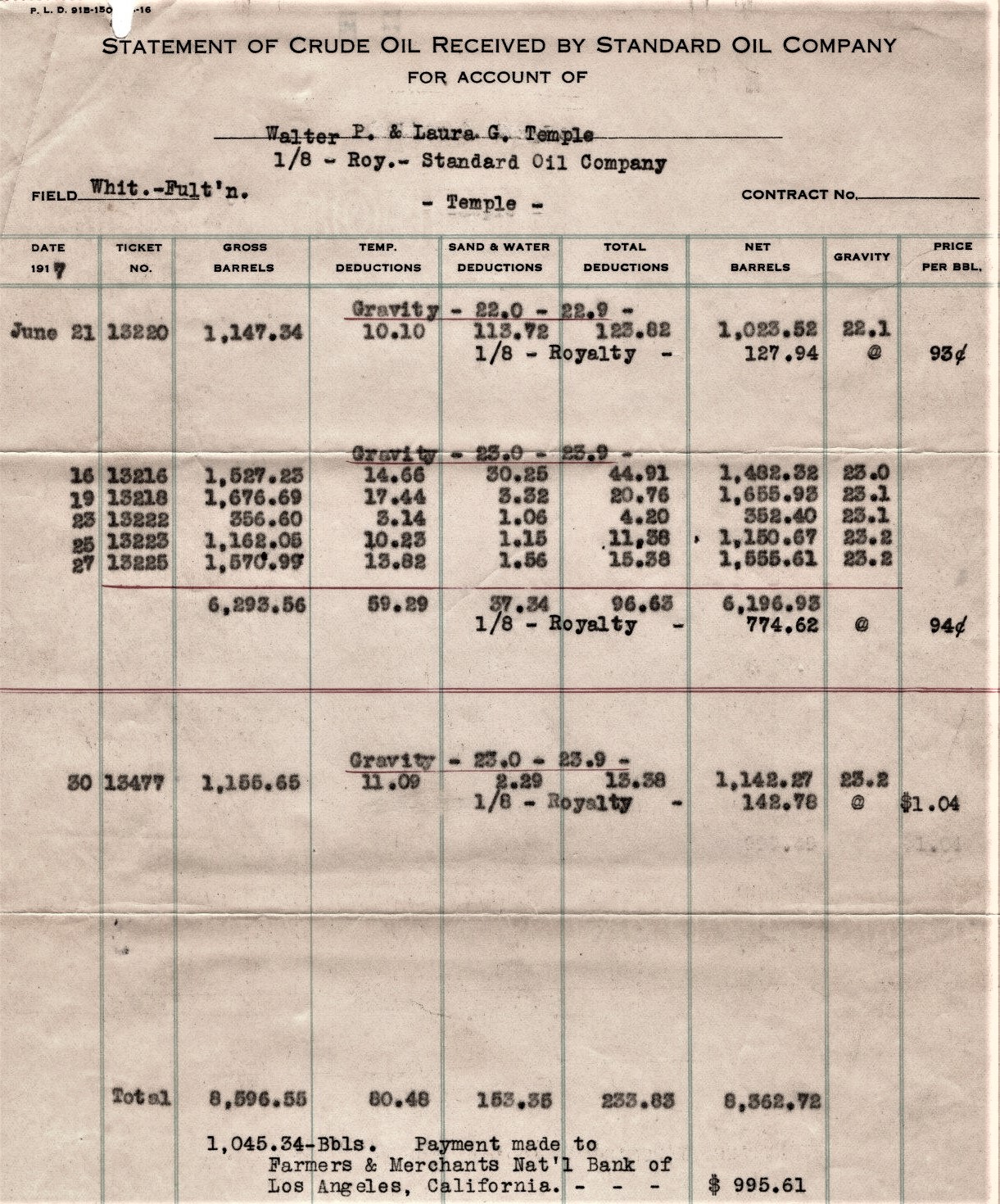 The story of how oil was found and then successfully unearthed on the Temple lease at Montebello in 1917 has been related here before.  In 1892, Walter P. Temple and his younger brother Charles inherited 50 acres of the family homestead upon the death of their mother, Antonia Margarita Workman de Temple.  They split the property, but when Charles left the area in the early 1900s, Walter became sole owner.

By then, oil was being produced in nearby Whittier, on Rancho La Puente lands owned by William R. Rowland, and in the Fullerton and Brea areas.  Just west of the Temple Homestead were the Montebello Hills, owned by Walter’s father, F.P.F. Temple, before the dramatic failure of the Temple and Workman bank and the loss of the hills to Elias J. “Lucky” Baldwin, who’d loaned money to Temple and William Workman for their doomed institution.

When Baldwin died in 1909, his daughters Anita and Clara, took ownership of the Montebello Hills, along with other of their father’s immense holdings.  Hiram A. Unruh, nephew of Lucky Baldwin’s first wife, was the executor of the estate and, in October 1912, executed an unusual deal with Walter P. Temple.  Sixty acres at the extreme northeast corner of the hills and adjacent flat lands to the east bordering the Rio Hondo were sold to Temple, but, because the latter lacked the funds to buy the property outright, a payment plan was set up.

In April 1914, Temple’s oldest child, Thomas, was playing in the hill area grandiosely called “Temple Heights,” when he stumbled on oil seepages.  The following year, a contract was made with Standard Oil Company of California, which had an arrangement with the Baldwin sisters for the rest of the hills area, and a test well was drilled on the Baldwin portion.

In late 1916, the Baldwin well was successfully brought in and the race was to drill more wells in the area.  The first Temple well, situated just a short distance east of the Baldwin test well, was started in late March 1917 and brought in on 12 June, yielding 650 barrels a day initially, though production dropped a little within two weeks, when the first news report was issued by the Los Angeles Times announcing the remarkable event.

Yet, production of that first well spiked much higher then reported in the Times, as attested to this post’s highlighted artifact from the Homestead’s collection: a “Statement of Crude Oil Received by Standard Oil Company” and issued on this day in 1917.  The statement included a cover letter from company auditor H.K. Fletcher and addressed to Temple in care of the firm’s producing department at its Whittier location that simply noted the inclusion of the statement, as well as an envelope.

The statement recorded information for production on the well between 16 and 30 June with information segmented by the gravity, or density, of the crude extracted.  Expressed in degrees as developed by the Baumé scale, developed in France in the 1760s and officially accepted as the American standard in 1916, the gravity of the oil was defined as light if over 31.1 degrees, as medium if between 22.3 and 31.1, and heavy if under 22.3 degrees.

So, the oil produced from Temple well #1 was generally medium, with some heavy portions, with ranges from 22.1 to 23.2 degrees.  The price per barrel was between 93 cents and $1.04, depending on the grade (the current market price is about $57).  The heavy grade was produced in 1,147 barrels on a ticket number dated 21 June and for 1,155 barrels for a ticket from the 30th.  Medium grade crude, amounting to 6,293 barrels, was ticketed on several dates from the 16th to the 27th.

Net barrel value for the reporting period was some $8,362 on the nearly 8,600 barrels produced and Standard Oil issued a industry-standard royalty to the Temples of one-eighth.  The net royalty amount was just over $1,045, but at the bottom of the document is the note that “Payment made to Farmers & Merchants Nat’l Bank of Los Angeles, California. — — — $995.61.”  Interestingly, this was the bank founded by Isaias W, Hellman, who was first partners with William Workman and F.P.F. Temple but bought them out in 1871 to establish Farmers and Merchants, while the latter formed their own bank.

To give an idea of how the Temples fared with just this first month of revenue at just under $1,000, the Internal Revenue Service’s “Statistics of Income” for 1917 show that nearly half of all returns (bear in mind that the income tax, first temporarily introduced during the Civil War, was brought back permanently in 1913 in the face of declining revenues as the Prohibition of alcohol was becoming more of a certainty and which was fully implemented a century ago this year) were by those reporting incomes of between $1,000 and $2,000.

If the Temples’ royalty payments were to have remained at $995 a month for an entire year (and they certainly did not as new wells were drilled and production increased), in other words at roughly $12,000 for the year, this would have put them in the top 5% of household income in the country.

Also noteworthy is that the average tax rate was just a bit over 6%, though the nation’s entry into the First World War just before the Temple well was brought into production meant a massive increase in tax rates to raise revenue.

As for the Temple lease, eventually some two dozen wells were drilled.  Some were dry, but many were producers, including some gushers.  The biggest was #9, brought into production just over a century ago in spring 1919, and, at one point, producing 30,000 barrels per day.  That meant royalties of some $4,000 a day for the Temple family, though production did not remain that high for long.

In any case, the Temples made a significant amount of money from the lease, with the bulk of it apparently coming in the first five years or so.  The Montebello field provided to be a relatively short-lived one in terms of heavy production and that looks to have diminished significantly by the mid-1920s.

Unfortunately, Walter Temple not only pursued independent oil prospecting in several areas in greater Los Angeles, as well as in Alaska, Texas and Mexico, but jumped into real estate development, another speculative field, in Los Angeles, San Gabriel, Alhambra and other locales, with his largest project being the creation of the Town of Temple, renamed Temple City in 1928.

Then, there were the significant sums invested in the Workman Homestead, acquired in November 1917, several months after the first Montebello well was brought in.  The renovation of the Workman House, rehabilitation of the nearly-destroyed El Campo Santo Cemetery, remodeling of the 1860s brick wineries, and, most significantly, the building from 1922-27 of La Casa Nueva involved large expenditures.

With oil revenue dropping and expenses rising dramatically, the decision was made in 1926 to sell bonds for in-process real estate development projects and a loan to finish La Casa Nueva.  The real estate market softened, oil projects failed to yield sufficient returns, and the financial condition of the Temples worsened significantly by the end of the decade.

In spring 1930, months after the New York stock market crash that ushered in the Great Depression, Walter Temple liquidated his Temple City holdings, lost the Montebello oil property, and leased the Homestead while moving to Ensenada in Baja California to save money.  When banks failed on a massive scale in 1932, the Homestead, the last of Temple’s holdings, was lost to foreclosure.

This document is one of many that help us understand Walter Temple’s finances in that fifteen year period from 1917 to 1932 when he made and lost a fortune—hardly a unique story in the ups and downs that defined much of America during that period.