This morning, the Homestead’s Non-Fiction Book Club discussed Maurice Manring’s Slave in a Box: The Strange Career of Aunt Jemima, a subject mentioned in a blog post here this past February centered on a photo of a vaudeville actress in blackface in the museum’s collection.  The Aunt Jemima figure has had a long and evolved history to the point that depictions now on product boxes are much different than what was originally depicted, though the basic concept is still, surprisingly, being utilized.

The museum has product packages, along with trade cards, postcard, newspaper advertisements and other items that tie into this theme of racial and ethnic stereotyping through commercial media.  So, my presentation to the book club earlier was a way to discuss how those artifacts relate to a broader theme in our interpretation from 1830-1930 of racial and ethnic identity. 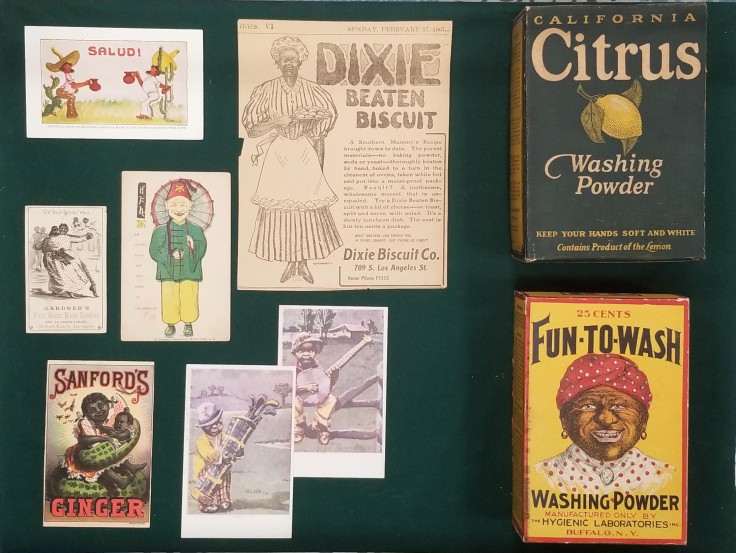 For example, William Workman, a native of England, migrated to New Mexico in what was still a part of the Republic of Mexico in the mid-1820s.  For about a quarter of century he was an ethnic minority there and in greater Los Angeles.  He was also a partner with Nicolasa Urioste, who was very likely Spanish, Mexican and Indian, in a biracial marriage that produced two children, Antonia Margarita and José Manuel.  They, in turn, were married to partners from other ethnic groupings. In Joseph’s case, his wife was half-American and half-Chilean, while Margarita married Massachusetts native, F.P.F. Temple.

The Temples had eleven children, eight living into adulthood, though, as noted here before, while they had common “Anglo” given names—Thomas, Francis, William, John, Lucinda, and so on—they were all fluent in Spanish and some (Thomas, William and Walter, for example) spent considerable time living or traveling in Mexico.  They retained elements of the Latino heritage while primarily being represented in greater Los Angeles as more Anglo.

The tenth of the eleven children, Walter, married Laura Gonzalez and their four surviving of five children were also given names that were representative of the ethnic majority in greater Los Angeles: Thomas, Agnes, Walter, Jr. and Edgar.  But, again, they all were fluent in Spanish and, significantly, because of the remarkable project that was the family home, La Casa Nueva, there was a stunning canvas on which to project (a verb here rather than the noun!) their self-image.

Often this invokes their Anglo heritage, whether it is a Temple coat-of-arms from England or the state seal of Massachusetts in metal work, stained glass and wood carving, but, more conspicuously, it is the Latino side that is more dramatically represented.  The eagle and snake from the Mexican flag, for example, is represented in wood and plaster work and the entire flag in stained glass.

More striking are stained glass windows in the Living Room of Thomas and Agnes in Mexican costume, derived from photographs taken of the siblings at the annual Mission San Gabriel fiesta.  A few years ago, we decided to place an original late 1920s promotional brochure for Temple City, which their father established in 1923, in a prominent position in the room so that, as visitors entered the space, they could see the displayed pamphlet with the windows as a backdrop.  Simply stated on the back panel was a race restriction that specified that only white people of a desirable class could live in the community founded by a man who was part-Latino.

Now, this was hardly unusual as almost all areas of greater Los Angeles were subject to what are often known as “restrictive covenants.”  Only the Boyle Heights/East Los Angeles area and much of south Los Angeles did not have these odious conditions in place for many decades.  But, the pamphlet in the context of the decoration and ornamentation of La Casa Nueva is striking.

It is also relevant, given the heightened attention and often contentious discourse these days about ethnicity and race, citizenship, the legal status of undocumented immigrants, and much else.  The museum has an opportunity, as do many other areas of public presentation and discussion, to raise awareness of the historical background that provides context and perspective to current events and issues.

The Aunt Jemima book and my short presentation, which included some very good discussion among the book club participants, are a part of that process.  I made a point of telling the group that the museum’s role as a facilitator, if not necessarily as an educator, on issues like the ones raised today are important to emphasize and put forward, especially now in light of all that is going on in the realm of what is often known as “identity politics.”

In fact, I offered the observation that all politics is “identity politics,” whether in terms of race/ethnicity, gender, political affiliation, sexual orientation, particular causes (gun control, the national debt, climate change, etc.), and many others.  We all have an identity, or more likely, identities, and these can, individually and collectively, evolve, morph and shift with the times.

So, as I talked about a box of washing powder, titled “Fun to Wash,” although it almost never is, I pointed out the depiction of a mammy on the front cover.  This image, though, doesn’t appear to be that far removed from the Aunt Jemima found on pancake mix boxes of that period.  In both cases, the imagery is overt and clear.

More subtle, though, is a box of California Citrus washing powder, in which the image is of a lemon (used in the product).  At the bottom, however, is the phrase “keeps your hands soft and white.”  It is possible that the copy writer was thinking of “white” in terms of the color of cleanliness, but it is also seems quite probable that there was a consideration of the likely customer base for the product.

Other examples shown included several more blatant stereotypical depictions of blacks in caricature with exaggerated physical features and alleged personality characteristics.   A newspaper advertisement from 1907 shows a “mammy” figure in promoting the Dixie Beaten Biscuit and the text begins by claiming that it was “A Southern Mammy’s Recipe brought down to date.”

A trade card for a ginger beer product shows a caricatured girl holding a baby in a watermelon cradle—this about as blatant and denigrating an image as we have in the collection.  A pair of postcards show stereotyped views of a caddy and a banjo player, while a trade card for a Los Angeles confectionery shop and ice cream parlor shows a dancing couple with the male’s face showing grossly exaggerated features.

Also common are caricatured images of Asians and Latinos.  The two examples shown today, though there are more (especially of the Chinese) in the collection, are for the Mayflower Hotel’s Monterey Cocktail Room and for the Shriner’s National Convention in Los Angeles.

The former shows two stereotyped Mexican figures in tall sombreros and with distorted figures sitting or leaning on cacti and holding clay jugs in their hands while the word “Salud!” is above them.  The latter shows a grotesquely depicted Chinese man wearing a Shriner’s hat (the Shriner concept was built on a Middle Eastern stereotype through the ubiquitous fez and the appropriation of Arabic sounding names for aspects of the order’s operations).  Intended to be sent home to friends and family of a Shriner, the text reads “Am Having Velly Hot Time Here in Los Angeles,” a mocking of the Chinese pronunciation of “very.” 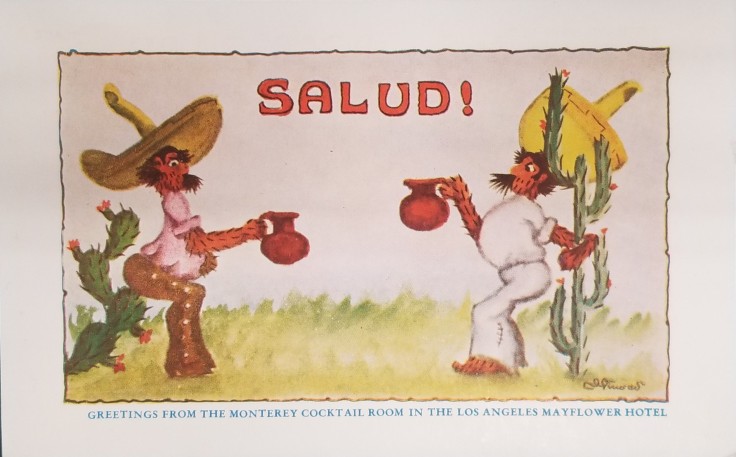 Frequently, these images were attempts at humor, obviously as the expense of other humans with varying physical features (though the blood is always red), while sometimes they were expressions of exotica, a perhaps slightly more benign expression of otherness.  One example I didn’t bring, but which will be shared here another time, is a collage of photos taken in Los Angeles’ Chinatown (where Union Station is now) and several show Chinese men and women avoiding the camera—a stark depiction of the sheer uncomfortable nature of the exercise of exploiting these people for commercial and other purposes.

While the examples shown today are, certainly by our standards, blatant and demeaning, they still do serve a purpose in reminding us of the fact that, however far we’ve become in combating the worst impulses of racism and ethnic conflict in the United States, there is still much more to address as we known from current experiences.

Again, the Homestead can be a place to facilitate the presentation of the history of these issues as well discussion and dialog about what that history has meant for where we are in regard to dealing with those questions and where we might go in the future.  We want to emphasize relevance whenever we can and today’s presentation was a reminder of what we can do to keep these matters of racial and ethnic stereotyping and caricature in the forefront of the museum’s interpretation.