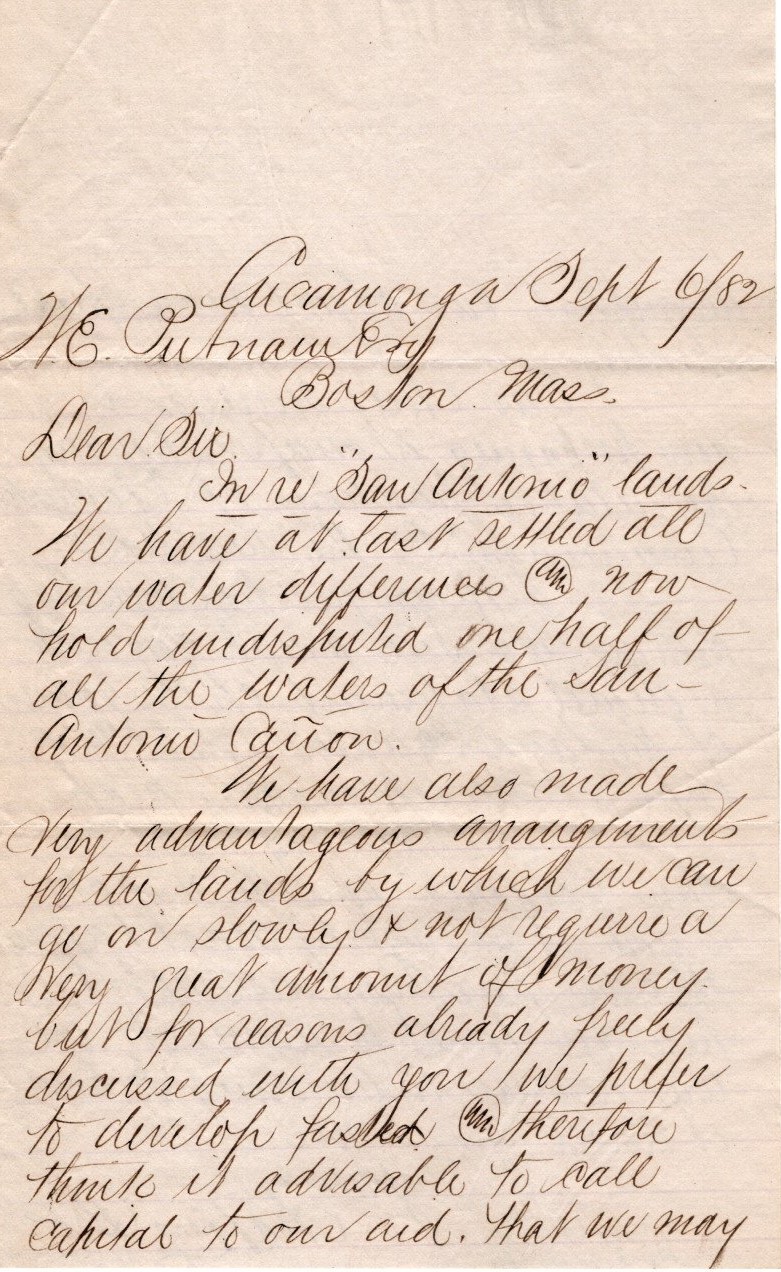 Among the developers of greater Los Angeles, there are some notable names that have left their legacies through names of places, streets, parks, schools and in other ways.  One of the more interesting ones were the Chaffey brothers, William (1848-1932) and George (1856-1926), who founded the “irrigation colonies” that became Ontario, Upland, and Etiwanda (Rancho Cucamonga) in the 1880s and then went on to create the first such project in Australia, Mildura.

The brothers were born in Brockville, Ontario, Canada, a community now with about 20,000 persons situated on the St. Lawrence River across from New York.  Although an Ontario heritage website claims the name means “city on the side of a mountain” given its location below the San Gabriel chain, the Chaffeys were obviously from that Canadian province and the Natural Resources Canada website states that the name is from the Iroqouis “kanadario” or “sparkling water” because of the lake of that name.

The brothers’ father, George, Sr. owned a shipbuilding business for Great Lakes steamers, and the Chaffeys resided at Kingston on the shores of Lake Ontario.  George, Jr. quickly developed an interest and facility in engineering, even though he abandoned his school at age thirteen.  He worked for a time as a marine engineer and then for his uncle in a Toronto bank.  After marrying in 1869, George, Jr. returned to work for his father and was well-regarded as a designer and builder of steamships for lakes and rivers.

When the Chaffey family pulled up stakes in 1878 and decamped for California because of George, Sr.’s struggles with tuberculosis (a condition which drew so many settlers to sunny southern California), they became settlers with other Canadians at the irrigation settlement of Riverside.  Included was William, though George, Jr. stayed behind to work in the shipbuilding business for a couple more years and then came out to join the family.

In 1881, George, Jr. and William acquired land on the Rancho Cucamonga from Portuguese ship captain Joseph Garcia and saw tremendous potential in the foothills of the mountains from which a broad alluvial fan encouraged thinking about how to develop the area into agricultural plots of ten acres with irrigated water brought from San Antonio Canyon above modern Claremont and Upland.

The first community the brothers created was Etiwanda, apparently named for an Algonquin Indian chief.  Developed on 2,500 acres, the community’s key was the tapping of the waters from San Antonio Canyon so that the brothers, George, Jr., in particular, could utilize their talents for engineering to bring a reliable water system to the area.

Tonight’s highlighted artifact from the Homestead’s collection is a letter from the Chaffey Brothers to W.E. Putnam of Boston.  Dated 6 September 1882, the missive, addressed from Cucamonga and date stamped there two days later, noted that “In re ‘San Antonio’ lands.  We have at last settled all our water differences and now hold undisputed one half of all the waters of the San Antonio Cañon.”

The reference is to the fact that the Chaffeys made a deal with the city fathers of Pomona, established in 1875 with funds borrowed from the Temple and Workman bank and which languished when that institution failed the following year.  By 1882, however, the Chaffeys were able to secure the half interest through a mutual water company, San Antonio Water, that they helped establish.

We have also made very advantageous arrangements for the lands by which we can go on slowly & not require a very great amount of money but for reasons already freely discussed with you we prefer to develop faster and therefore think it advisable to call capital to our aid that we may accomplish our object more speedily.

Next, there was reference to a surveyor who was “preparing a map showing the relative positions of ‘Etiwanda,’ ‘Cucamonga,’ and the new tract,” this latter apparently being Ontario.  Putnam was then invited to join in the project and the brothers added “we will furnish you with a detail statement of the values of the lands and water rights and a copy of the explanatory map.”

Notably, another water source was “so eagerly sought after,” this being the San Gorgonio region to the east above modern Highland, beyond San Bernardino, but “we fear you will not be here in time to secure it” though the Chaffeys were “endeavoring to hold it until you arrive.”

George Chaffey’s acumen in building a stable and successful water delivery system included using cement pipes, a new concept, for the main channels, but there were also creative planning devices, institutions like the Chaffey College (later divided into a high school and junior college), and the introduction of the prohibition of alcohol that distinguished the colonies. 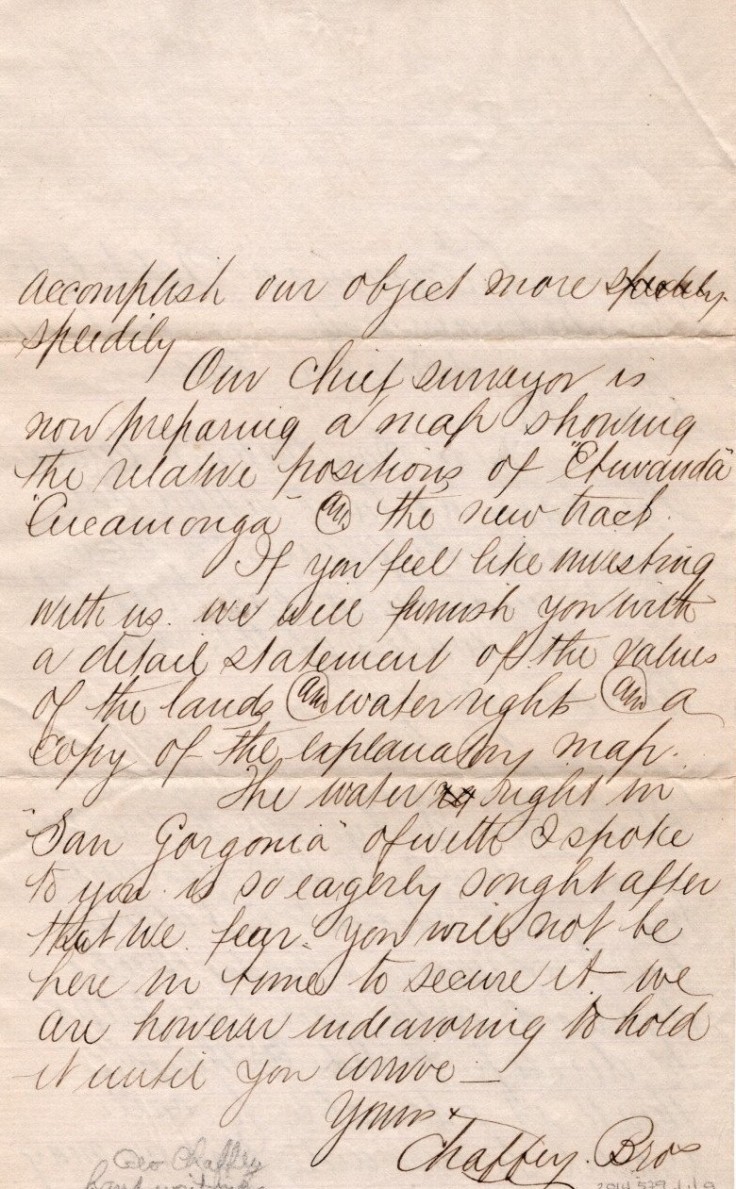 Meanwhile, George and William established ties with Los Angeles capitalists, most notably Robert M. Widney, a real estate promoter, attorney, district court judge and a prime mover in the establishment of the University of Southern California.  A prominent project was the Los Angeles Electric Company, which allowed the City of Angels to have one of the finest electric light systems in America as the use of electricity was just starting to gain momentum.  George was also instrumental in introducing trunk-line telephone systems in the region and had an ice company with Widney, his brother William and others.

The intricate planning and resulting success of the Chaffey irrigation colonies caught the idea of Alfred Deakin, an Australian government minister who came to California to study irrigation because of serious drought problems in the northern part of the province of Victoria.  George Chaffey was convinced that he could apply his methods of irrigation and town development from California in Australia and hurried “down under” to investigate possibilities. 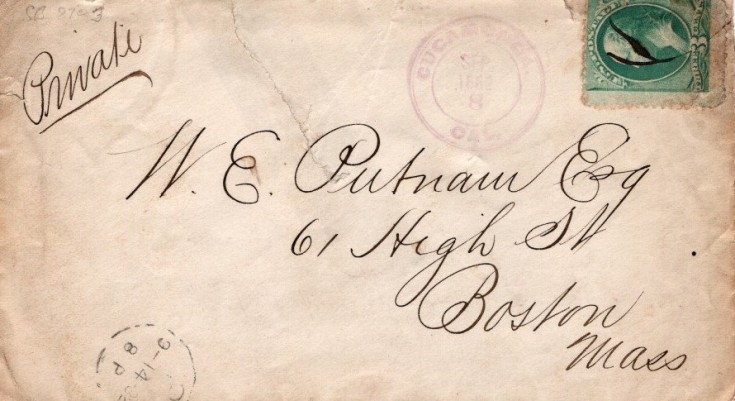 Carried away with great enthusiasm and a promise of some 250,000 acres of government land, George wired William with instructions to sell their interests at Etiwanda and Ontario and join him in Australia.  The result was the creation of Mildura, a community north of Melbourne.  In fall 1886, the brothers made a deal with the provincial government committing to significant outlays on improvements in the town over two decades.  In 1887, they proceeded with further agreements via their firm of Chaffey Brothers, Limited, and, meanwhile, added another 250,000 acres at Renmark in South Australia to the scheme.

Despite many challenges, the brothers expended tremendous energy and resources into their Australian project and, by 1890, there were over 3,000 residents at Mildura and over 1,000 at Renmark, many of them migrants from Great Britain.  The same methods of intricate city planning and irrigation were employed.  Problems mounted, though, when disputes arose over how water was being obtained and distributed by the Chaffeys.

Claims of illegal practices dogged them and there were calls to have the government assume control of the irrigation elements.  An irrigation trust was created for Mildura, while George raced to London to try to sell his Renmark property.  Moreover, there were serious debuts, including unpaid wages to workers, about 80% of the land in both Mildura and Renmark unsold, and mortgage foreclosures on many settlers.

Government intervention did save the two colonies, though Chaffey Brothers, Limited was liquidated.  A government inquiry stated that George and William did not have enough funding and that planning was inadequate.  The former then headed back to the United States in summer 1897, while the latter remained in Australia.  George plunged back into work at Ontario, specifically to use underground storage to bring more water to the growing community.  He also was essential in getting Colorado River water diverted to desert areas of southeastern California dubbed Imperial Valley.

George also worked with his son Andrew in opening the American Savings Bank, of which George was president and Andrew was a director, along with William Henry Workman, nephew of Homestead founders William and Nicolasa Workman and a former mayor and then city treasurer of Los Angeles.  The Chaffeys and Workman were near neighbors in Boyle Heights, which Workman created in the mid-1870s.  George was also vice-president of American National Bank.  He spent much of his later years in Whittier working on land interests there and then at Pacific Beach near San Diego where he died in 1932, though he was laid to rest in Ontario.  One friend praised George, but noted that he was “limited only by his excesses.”

As for William, who was less well-known than his older brother, he stayed at Mildura and developed a successful 200-acre orchard on which he established a winery as well as raised fruit.  He served on a local governing council and was mayor of the Mildura Borough in the early 1920s.  He died in 1926 and was considered a venerable pioneer and community leader, while his home Rio Vista became a cultural facility and survived today.

The name Chaffey is commonly found in the Ontario/Rancho Cucamonga/Upland area, through Chaffey College, Chaffey High School, and the Chaffey Communities Cultural Center, for example.  The initiative, innovation and planning put into the area was instrumental in the success of the colonies, even if the Chaffey Brothers sold out quickly, albeit George did return later to reinvest in the area.

Their story is a fascinating one for greater Los Angeles as it moved into a new phase of its development history in the last two decades of the nineteenth century.  The Garcia Chaffey House, built by Garcia in 1874 and moved to its current site in Rancho Cucamonga is open to visitors.