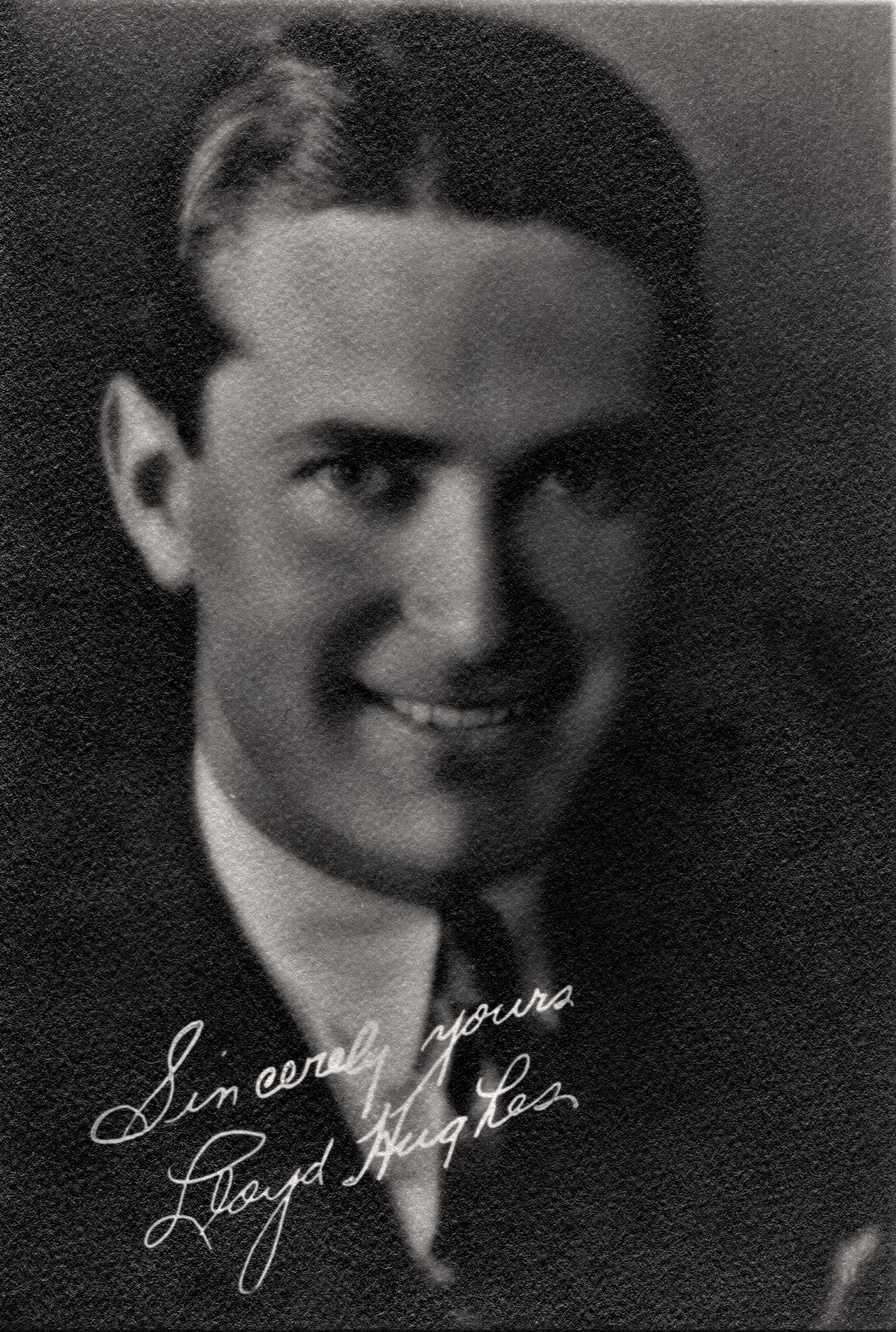 Years ago, the Homestead sponsored a silent film series and one of the features was The Lost World, a 1925 classic based on a 1912 story by Sir Arthur Conan Doyle, creator of Sherlock Holmes.  The First National Pictures release was a sensation as its story of dinosaurs returned to the modern world featured the special effects magic of Willis O’Brien, who later achieved greater fame with 1933’s King Kong.  Among its starts were Wallace Beery as the lead, Professor Challenge; Bessie Love as female lead Paula White; Lewis Stone, whose stage career has been covered here and who went to film notoriety in the Andy Hardy series starring Mickey Rooney; and Lloyd Hughes.

Hughes’ name seemed familiar when today’s highlighted artifacts were acquired for the Homestead’s collection, these being a publicity photo of the actor and the mailing envelope in which it was sent.  Hughes had a long career, spanning just over two decades from the late 1910s to late 1930s, and was a leading man for over a decade, though he did not achieve top-draw fame.

Born in 1897 is Bisbee, Arizona, near the southeastern corner of the then-territory near the Mexican border, Hughes lived with his family southeast of Phoenix before migrating with them to Los Angeles after 1910.  He attended Los Angeles Polytechnic High School and was drawn to the film industry by mid-decade.  He worked as an extra for a couple of years and his World War I draft registration shows that he was employed by Universal Pictures.

His big break came when he was signed by Thomas H. Ince, one of the major film moguls of his day, and Hughes was given his first lead role in 1919.  One of the first press notices for the young actor came in the Los Angeles Express of 31 January 1919, when it was mentioned that “a new juvenile lead is to be introduced to the public by Thomas H. Ince” in what appears to be a lost film called The Haunted Bedroom and that Hughes “has been playing small parts in pictures.”  Several weeks later, another article pointed out that Ince was drawn to the nascent actor “and was struck by the boy’s appearance and manners.”

In 1920, Hughes was given top billing in Ince’s production of Homespun Folks, marketed as “A Great Big American Heart Drama of Big, Human, Wholesome People.”  For a public weary of the destruction and death of both the First World War and the worldwide flu pandemic of that era, such simple fare and Hughes’ boy-next-door good looks and on-screen charm definitely fit the bill, literally.

The following year, Ince’s Hail the Woman! featured the rising star and ads promoted Hughes’ character as one who “Arises to Manhood when he first sees his own little son,” again casting the star in a wholesome, heroic role of simple, direct human values.

In 1922, Hughes further burnished his credentials when he appeared with screen legend Mary Pickford in 1922’s update of her earlier classic, Tess of the Storm Country.  Around this time, he’d worked with such top-tier directors as Fred Niblo, King Vidor, Frank Borzage and other notables.

By 1924, when Hughes built a house in Beverly Hills (one sign of “making it” in the film industry), he signed a long-term deal with First National Pictures, one of the majors and had the interesting idea of compiling a library of his films to be stored in the basement of his residence, which was also to have “a luxurious projection room” in the living room convertible “within a few minutes when required on the order of the Pickfair projection facilities,” Pickfair being the company of Pickford and her husband, dashing action hero Douglas Fairbanks, Sr., as well as the name of their massive home.

Hughes appeared in 1924’s The Sea Hawk, which had life-size ships engaging in battle at enormous cost, but also scintillating effect.  The 1940 Errol Flynn classic had a different plot, but battle scenes from the earlier picture were used as, even then, they were considered superior.  The mid-Twenties were busy years for the actor, as he made seven films each in 1924, 1925, and 1926.

That July, the Los Angeles Times had a lengthy article titled “Lloyd Hughes in Demand” and which followed him for wrapping the final scene for one film and stated he was due in to work the next day to start another picture.  It added, “Hughes is one of those leading men whose professional date book is always well filled” albeit with roles that called for the actor “to play fairly traditional heroes.”  The article also claimed that “Lloyd Hughes is a great deal like the character he plays.”  He was deemed “genial and brisk” and was said not to have cared “at all for hectic realism.” It was hardly an accident that he did several pictures each with Colleen Moore and Mary Astor, actresses who also exemplified wholesome characters in their heyday.

By the end of that latter year, though, Hughes was looking for a change from the wholesome roles he’d been typecast in and the Times, in its 19 December 1926 edition, titled a lengthy article on him, “Fed Up On Heroes.”  His latest film, Valencia, starred Mae Murray, whose decision to leave MGM effectively ruined her popular career, but Hughes was happy to play a Spanish sailor because he “is terribly fed up on immaculate young heroes who are well dressed and dull.”  Valencia was the only of his seven pictures that year in which he was not cast as “the conventional, well-dressed young man.”

One of the problems with the typecasting of Hughes was reflected in another Times article, published in August 1927 and with the headline “Lloyd Hughes is Young Man Mothers Like” and which began by asserting, “Lloyd Hughes is the kind of young man every mother hopes her daughter will marry.”  It added, “he is just like the ‘that boy who lived next door'” or the nice college kid or the genial fellow who married someone’s cousin.  This kind of characterization might well have kept Hughes from achieving the stardom of major leading men like John Gilbert, John Barrymore, Fairbanks and others who had images that had more than a hint of danger, adventure and intense sex appeal.

Married to actress Gloria Hope in 1921, Hughes decided, after his First National contract expired that he would freelance and also took an extended vacation during the time his first of two children, a son was born.  In its 19 December 1927 issue the Times covered the actor’s leaving First National and quoted him as saying “it’s certainly great to be free again!”  Happy to be on his first vacation in three years, Hughes related “I’ve tried both contract and freelancing and I find the latter to be much more satisfactory.”

While the actor celebrated his new-found freedom as an independent, the pace of work slowed and whether this was due to not being bound to a studio, changing tastes of film audiences or Hughes’ decision to take on fewer projects, his star began to dim by the end of the decade.

In 1929, Hughes worked with director Tod Browning and famed chameleon actor Lon Chaney on the latter’s second-to-last project, Where East is East, and made the transition into sound films.  A notable role was in 1930’s Moby Dick, starring John Barrymore and Joan Bennett.   He made seven films that year and six the following and then slowed down again, making a personal appearance tour and then appeared in theater.

He made something of a comeback in 1934 and the Times made brief note of the return of “the prodigal son” with Hughes described as “another of Hollywood’s long-lost sons [who] strayed back to the fold.”  Looked upon as a “one-time star of silent pictures” who peaked in his collaborations with Astor (who is best known for her work in The Maltese Falcon and won a best supporting actress Oscar that same year, 1941, for her performance in The Great Lie,) the article observed that Hughes was away from film for about three years, but Universal signed him for The Man Who Reclaimed His Head and the actor “is thinking about staying around for a while.”

Indeed, Hughes appeared in nine films the following year, though not in the starring roles of his heyday.  Meanwhile, he also turned to singing and surprised many in the film industry with the quality of his vocals, enhanced by avid study and lessons, as he performed on radio from time-to-time.  His later films were mostly B-pictures or ones made in Australia and his last known performance was in 1939.

Almost immediately he turned to commercial sales and advertising and worked for the rest of his life with the firm of Sperry and Hutchinson, best known to people of a certain age for its S&H green stamps, which were heavily utilized by shoppers for decades.  Long receded from the spotlight, Hughes moved from a large Hancock Park home to a suburban mid-century residence in San Gabriel, near the San Gabriel Country Club and lived there until his death at age 60 in 1958.

From time-to-time, one of his old films, such as The Lost World, Moby Dick or a couple of others might show up on late night television or in revivals at such venues as the Silent Movie House, but Hughes, like most actors of his time, was largely forgotten.  The publicity photo here shows the handsome actor in a typical head shot with the inscription “Sincerely yours / Lloyd Hughes.”

The image was sent in an envelope printed with his name and office in the Taft Building, a twelve-story structure completed in 1923 at the corner of Hollywood Boulevard and Vine Street and approaching its centennial.  The community’s first high-rise, the Taft has long been identified with the film industry, with agents, lawyers, publicists, casting companies and others having space in the structure.

Also printed on the envelope are the names of five films Hughes made in 1927 and 1928 after he left First National and went on his own.  On the reverse is an ink inscription of the date  “Mar. 28, 1928,” presumably the date  the addressee, the fabulously named Beulah Klink, of Canton, Ohio (home of the Pro Football Hall of Fame) received her photo.

We've used this only known image of the Temple and Workman bank to tell many stories, with ones about people being the most fascinating. Note that the initials and last names of each individual in the photo are documented with the exception of one: "'Green' the Janitor." Who was this man? Our museum director Paul Spitzzeri helped bring his story front and center when he wrote about him for our blog, noting that among many other things, he was the first black person in LA to register to vote and helped many others do the same. Read the fascinating story here: http://ow.ly/nJF850zY5aU
What led to the disappearance of one of California’s most gifted female literary figures? Join us for Female Justice: The Disappearance of Yda Hillis Addis this Sunday at 2 p.m. This is a virtual program. #femalejustice #museumfromhome https://www.homesteadmuseum.org/upcoming-events/talks-lectures/
Two months later and our Lady Banks rose bush is still just as lovely. https://www.instagram.com/p/B9-UAJsgbX7/?igshid=uyxw8hhwxf2y
‪Check out these photos of our historic pomegranate trees. ‬
Avocado lovers! Save the date for the Virtual Avocado Festival & Educational Academy, June 22-27. As part of this event, Museum Director Paul Spitzzeri will make a presentation called The Hanging Gardens of Babylon in Southern California: Edwin G. Hart and the Avocado Tracts of Hacienda Heights and La Habra Heights, 1910-1930. Stay tuned for more details!
The Unfurling Story of the Homestead's Grapevines. DNA test results from UC Davis reveal that our vines are indeed related to the Viña Madre growing at the San Gabriel Mission. https://tinyurl.com/ycgz2vc5